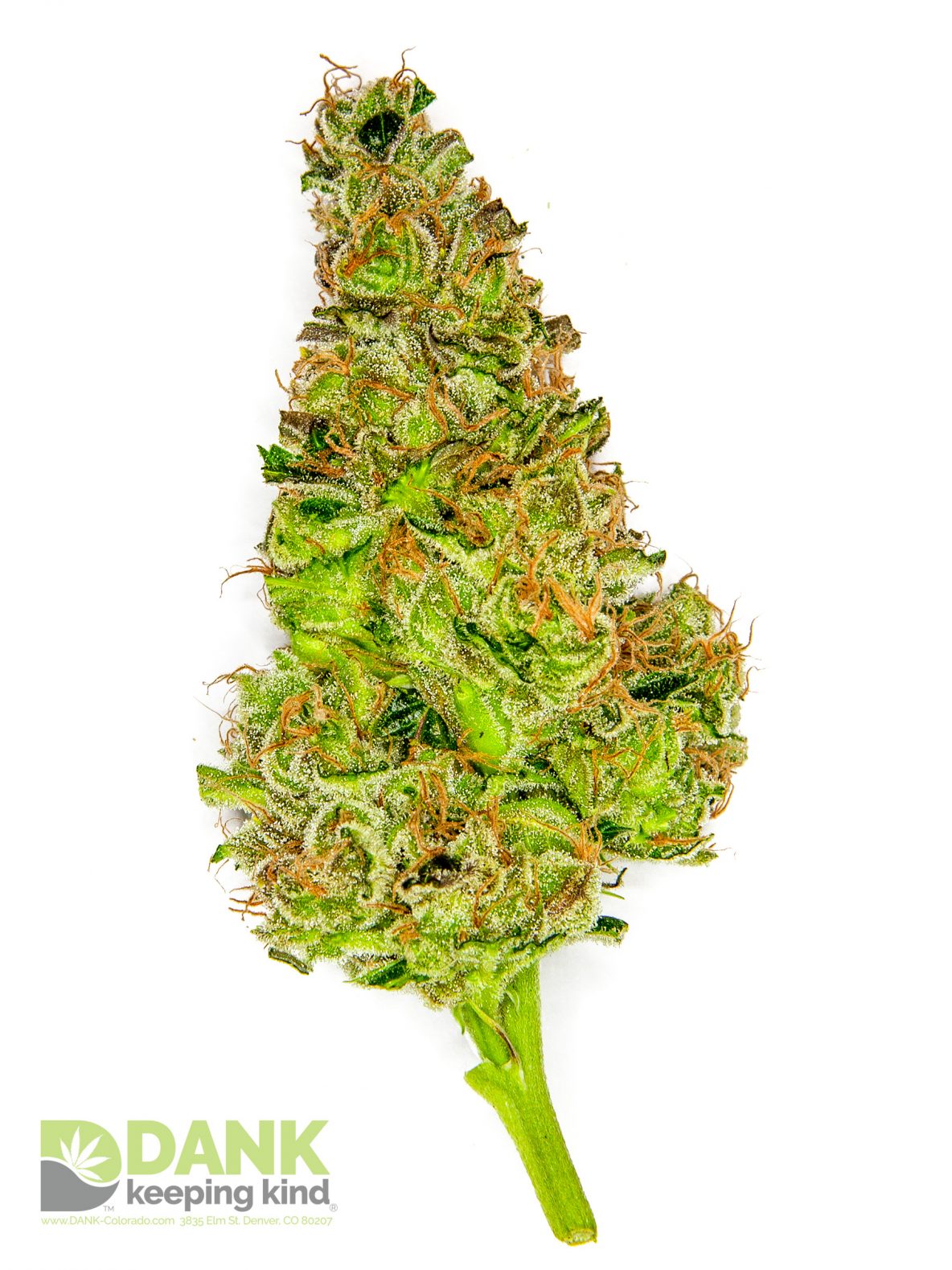 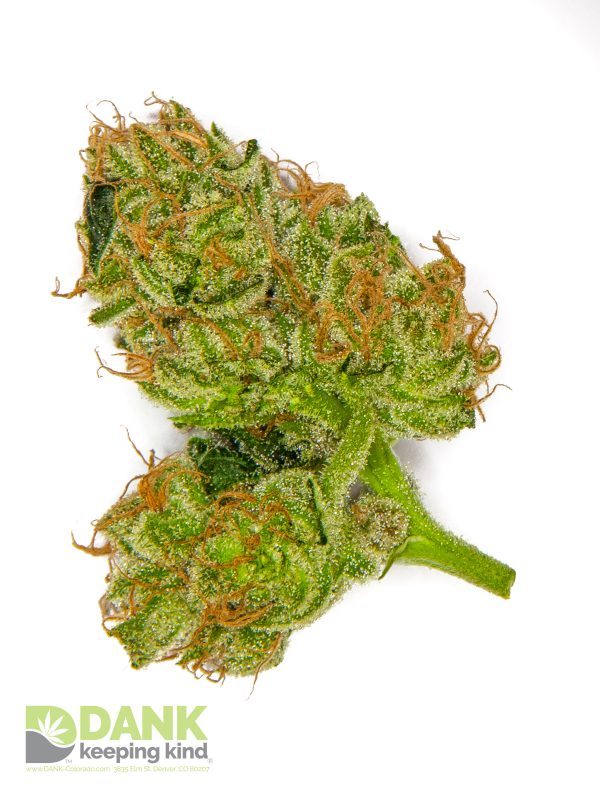 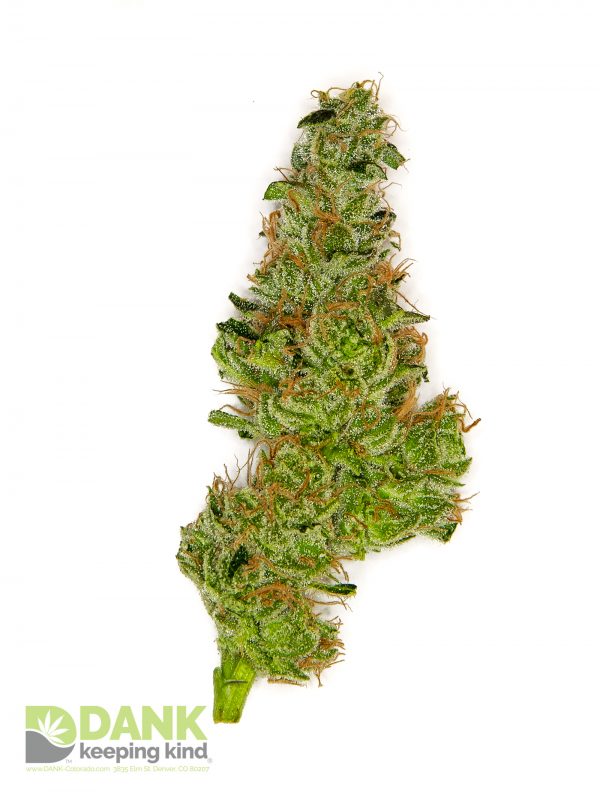 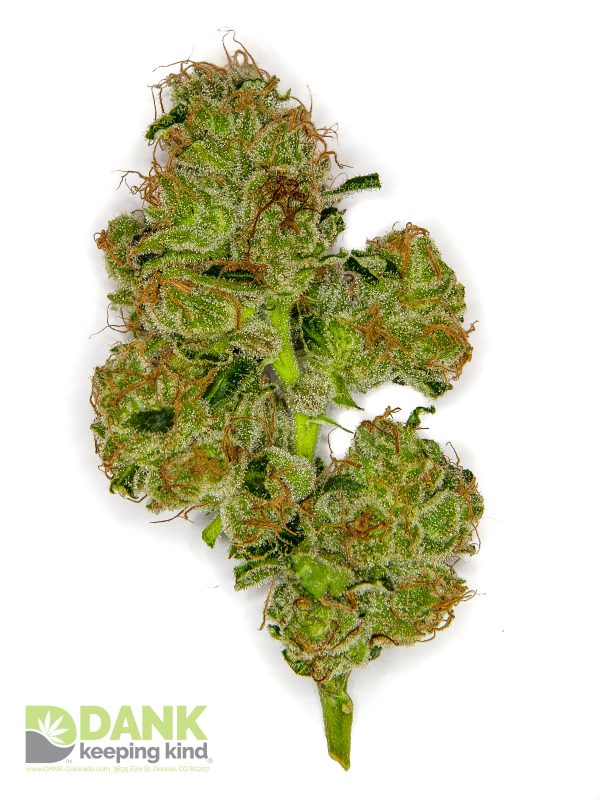 Sour Diesel is one of the foundation strains at DANK. It has been in the garden since 2009 and continues to impress our medical and recreational customers. Sour Diesel’s energized and positive high makes it easy to see why the strain enjoys popularity across the United States. Sour Diesel is an extremely popular strain, distinguished by the fuel-like chemical smell of its flowers. It has a mostly sativa head high with some subtle physical indica relaxation, making it popular among recreational and medical users alike. This is a potent strain at DANK, with a THC content that ranges between 20% and 25%.

Sour Diesel has round, medium-sized buds with leaves that appear yellowish-green. Red hairs called pistils, structures that operate to catch pollen from male plants, contrast with the densely-packed leaves. When properly cured, the flowers are somewhat sticky — the dusting of trichomes is not as immediately obvious as it is on more resinous strains like White Widow. Nevertheless, breaking open buds reveals trichomes coating the insides of the dense flowers. The buds have an overpowering smell that, true to this strain’s name, is very similar to gasoline. The odor also has some hints of orange. Breaking open or grinding the buds intensifies this scent, and adds components of musk and pine sap. Sour Diesel has a notoriously harsh, acrid smoke that can cause users to cough or make their sinuses water. The smoke has a sour and vaguely skunky taste that may describe as unpleasant; on the exhale, the diesel and almost ammonia-like tang stings the palate and may linger for a long time afterward. Smokers trying to remain discreet should be warned that this is a very pungent strain whose odor can carry for quite a distance.

The high from Sour Diesel comes on users quickly in the form of a warm and pleasant head rush. An uplift in mood may be noticeable as well. Although Sour Diesel stimulates synaptic activity in the brain, the character of this head high is more spacey than intensely cerebral. Users may feel chatty if surrounded by others or somewhat introspective if enjoying the strain alone. For many, this soaring high is partially anchored by a slight feeling of physical relaxation. That said, a body stone that leads to full-on couch-lock is rare. Its tendency to lead to associative thinking may provoke a bit of creative inspiration. Fans of the strain also describe relief from troublesome aches and pains. Sour Diesel’s combination of mental and somatic effects may also make it a potent aphrodisiac in certain situations. As is common with many strong sativas, the altered mental state brought about by Sour Diesel may prove overwhelming for some, leading to paranoid, recursive thinking or a feeling of being generally “out of control” of one’s thoughts or body.

5%
For graphic purposes, the slider bars have been modified to represent a percentage of total terpenes in the flower. In this case, total terps were +/- 14.6%. Results may vary.

1.0%
The cannabinoid profile represents the high mark over the past 6 months of testing. Results may vary. These statements have not been evaluated by the FDA. This information is not intended to diagnose, treat, cure or prevent any disease. Consult your physician before using cannabis.